But, the impact of these changes is wholly dependent on what type of traveler you are. Today I’m going to focus on what the announcement means to mileage collectors like those in the Travel Miles 101 community, who are generally not chasing top-tier elite status and instead focus on saving money on a few vacations each year.

First of all, yesterday’s American Airlines changes are not another award chart devaluation like we saw in March 2016. So, your banked award miles are safe! Thank goodness too, as my wife and I have banked nearly 1,000,000 AAdvantage miles over the last 1.5 years through a combination of credit card sign-ups and paid flights.

The changes announced yesterday are mainly focused in two areas:

Why This is Good News for Many in the Travel Miles 101 Community:

Who These Changes Hurt: 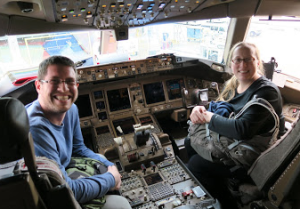 Katie and me, and travelers like us. If you had enjoyed booking cheap international flights on American Airlines and earning a ton of award miles from flying, you are going to be hurt by these changes too.

Effective for flights departing on or after August 1, your award mileage earnings from paid flights will be based on: (1) how much you spent on the ticket and (2) your elite status. Without getting to far into the details, you will earn between 5 (general members) to 11 (top-tier members) award miles per dollar spent – excluding taxes.

A perfect example of the impact of this change is our recent flights to Kuala Lumpur, Malaysia. For the $547 ticket, my wife’s mileage earnings would be drastically different depending on when she traveled:

What Should You Do