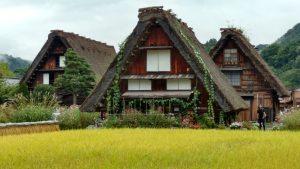 The historic UNESCO village in Shirakawa-go.

Do you remember where you were the first time you learned about the travel rewards game? Ryan McDannold and Jessica Lab sure do.

They were in the back of an Uber in Columbia, South Carolina. The driver was taking them to the airport for their honeymoon flight to Tanzania.

“He was a real expert on points and MS and we didn’t know anything,” Jessica says, laughing. “He gave us some good advice to begin our journey.”

When the newlyweds returned from Africa, Jessica began researching the concept, and after a few months, discovered Travel Miles 101.

“I took the free course and it definitely accelerated our process. I learned about the sweet spots for travel booking and being flexible and, of course, how valuable Chase Ultimate Rewards are to this process,” she says.

“My first concern was that applying for all these credit cards would negatively impact our credit scores,” Ryan says. “We were looking to purchase a house in the next year or two and I wanted everything to be perfect when we applied for a mortgage.”

Ryan is engaged in the financial independence / early retirement community, so little things like credit scores are important for him and his family’s long-term goals.

But after applying for several cards and seeing very little fluctuation in their scores, he got onboard with Jessica’s strategy.

About 16 months after taking the TM101 course, the couple celebrated Ryan’s 30th birthday by taking their first big trip on points, flying to Tokyo first class on Singapore Airlines.

“It was a once-in-a-lifetime experience,” says Ryan.

Here’s all the details:

THE FLIGHTS TO JAPAN

This traveling couple live just outside Denver, in Boulder, Colorado. Early into her research, Jessica realized they could get the best bang for their buck flying nonstop from Los Angeles to Tokyo on Singapore Airlines. And by booking online, they would receive a 15 percent savings on their trip. 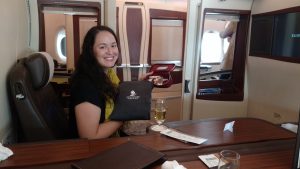 The first class suite on Singapore Airlines. Greeted with champaign and gifts upon boarding.

“I wouldn’t have burned so many points for just any airline’s first class cabin,” Jessica said. “But I did my research so I knew Singapore had one of the very best cabins. And we were only flying first class one way, so it had to be a great experience to make it worth the points.”

The booking was not without challenges. Jessica spent hours checking for two seats together on any day in September, October or November of 2016. When she finally found one single day offering the magical combination, she had to transfer her Chase UR points to Singapore, and wait for them to post, which took almost 48 hours.

“I was so scared the seats would be taken before I could book them, and they were the only ones available for the rest of the year,” she said. “I called everyone – Chase, Singapore, everyone – asking them to make this happen for us.”

She’s not convinced her badgering did any good, but they successfully secured the flights they wanted.

Rounding out their trip, Jessica purchased cheap one-way flights from DEN-LAX, arriving six hours before their flight to Tokyo. As a first class passenger, they took full advantage of the dedicated first class lounge at LAX.

Turns out that was a good preparation for the flight, which the pair says was nothing short of remarkable, including the side-by-side lay flat seats that made a double bed, the comfortable pajamas, full sized bottles of perfume and lotions, and exquisite tasting menu with caviar, Dom Perignon and Krug Grande Cuvee, thank-you-very-much.

Jessica and Ryan cashed in 150,000 UR points from two Chase Sapphire Preferred and one Chase Ink bonuses for their magical experience. Plus $45 in taxes.

The flight home was nonstop from Tokyo to Denver on United. Ryan received a targeted offer for a 70,000 bonus for the Chase United card, which covered the 35,000 needed for each of their one-way tickets home. Plus $80 in taxes.

Jessica and Ryan stayed busy on their two-week tour of Japan, hitting nine cities and regions in their fortnight of travel. The stops included: 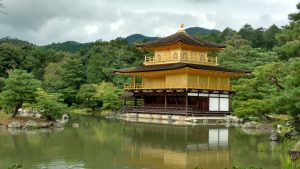 Kinkaku-ji, a temple in Kyoto completely covered in gold leaf.

Tokyo – both arrival and departure city.

Hakone – a quaint hot springs town within one of Japan’s national parks.

Japanese Alps – the couple took a daylong scenic journey through the mountains including a tram, bus, railway, and cable car.

Shirakawa – they toured a UNESCO world heritage village in Shirakawa.

Miyajima – a small island near Hiroshima and one of the top scenic locations in Japan.

Jessica used points for just one night’s accommodations during their tour – the final night in Tokyo before catching their nonstop home to Denver. The Hyatt Regency in Tokyo had a list price of $350, and they used cash + points, spending $90 and 5,000 UR points.

The rest of the nights were spent in a combination of hotels, Airbnbs, and a Ryokin – a traditional Japanese bed and breakfast.

“We’re not big hotel chain people,” Jessica said. “So right now, we focus most of our point spending for flights, and pay for lodging out of pocket.”

But they were deliberate about maximizing their earnings when spending money on lodging or food for trips. They took an expedited shipment of Jessica’s Chase Sapphire Reserve before their departure to ensure they received the 3x’s points on all travel and dining expenses, including train tickets, taxis, hotels and restaurants.

FOOD AND FUN IN THE LAND OF THE RISING SUN 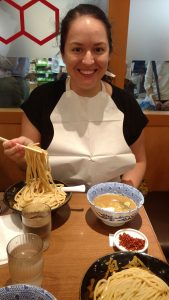 Ryan reports that Jessica is a foodie at heart, and spent almost as much time and energy researching the best restaurants in every town and village they visited as she did researching point redemptions.

“The food in Japan was incredible,” Jessica said. “Dumplings and ramen and sushi and fried pork things. We spent hours waiting in ramen lines outside tiny shops all across the country.”

One of the couple’s favorite money-saving tips for Japan was an unexpected “sweet spot” for food frugality.

“We ate almost every breakfast at a 7-11,” Jessica reported. “That sounds weird, but they are super nice in Japan. They are really clean and serve hot foods and coffee – almost anything you want. We would each purchase a hard-boiled egg – in Japan, the yolks are dark and salty and delicious – and a rice cake stuffed with tuna or salmon. We could both eat breakfast for about $3.”

Ryan said he was surprised at how reasonably priced they found the country, especially after all the warnings he had received about the high cost of living and travelling in Japan would be.

“Honestly, that’s why it took so long to check this trip off our list, but we found it to be mostly equivalent to the US on price points for lodging and food – but you don’t tip in Japan, so you’re already knocking off about 20 percent of your dining costs.” 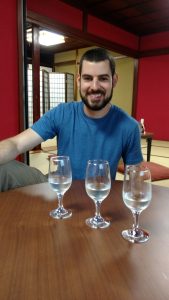 Jessica said one of her favorite adventures of the trip was exploring Kyoto, where they spent three days wandering through temples and shrines across the city.

While some of the holy sites charged an entrance fee, some were free, and provided great insights into the history of the area.

For Ryan, one of his trip highlights came in Tokyo. As it happened, the their trip to Japan fell during a Sumo Tournament in the capital city. Ryan tried to reserve tickets online in advance, thinking it would be a fun cultural experience. But the price tag of $200 stopped him short.

When they arrived in Tokyo, Ryan learned that there was a frugal alternative to secure tournament tickets, but it involved showing up early and standing in line hoping they still had an unreserved ticket left when you got up to the window.

So they stood in line, in the rain. Scored a couple of $40 tickets in the rafters. And enjoyed an unforgettable night watching professional sumo wrestling in Tokyo, Japan.

“I really didn’t know much about sumo before we went, but it was a great experience. We loved watching school kids cheering for their favorite wrestlers up in the nosebleed seats.” 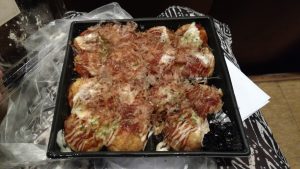 Octopus balls and sumo wrestling – who knew it could be a match made in heaven?

This sporting and cultural event also featured one of the their favorite culinary experiences of the trip – fried octopus pastry balls called Takoyaki.

“We were starving when we got to the stadium and weren’t too sure what we could get at the concession stand. But we ended up with this whole tray of dough balls stuffed with octopus and a special sauce . I’m sure it is as common in Japan as hot dogs in the US, but it was amazing.”

The Labs say their trip to Japan was unforgettable, and saving over $15,000 by using points for their airline tickets made it even sweeter.

“It’s really amazing what you can get for free with these points,” Ryan said.

As folks who are still fairly new to the points and miles game, the Jessica and Ryan have found creative ways to maximize their point values for unique travel experiences. So we asked what advice they might have for Travel Miles 101 followers who are new to the game. 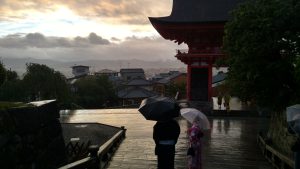 Kyoto at sunset as seen across the Kiyomizu Temple.

“I think travel rewards pairs together nicely with the pursuit of Financial Independence / Early Retirement. A lot of us on that road might err on the side of depriving ourselves,” Ryan said. “But if you have the opportunity to pursue travel rewards for a little work and no money, it makes the journey sweeter.”

Either way – down under or down south – this traveling pair has many more adventures ahead.

Based in Tennessee, Christina spends her days helping clients tell their stories through her work at a marketing and communications firm. She and her husband hustle hard every day in their very grown-up, 8-5 jobs, while actively pursuing financial independence through joyful frugality, real estate investing and travel hacking.