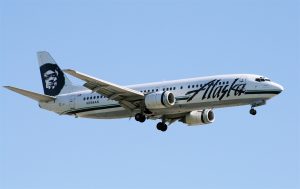 Alaska Airlines may not be the world’s #1 airline, but they do have one powerful aspect to them – their frequent flyer program, which is by far the best frequent flyer program in the United States. What makes Alaska’s Mileage Plan so incredible are the unique partnerships that Alaska Airlines has introduced – the Seattle-based airline is partners with airlines from every major airline alliance and then some more.

You can redeem Alaska Airlines miles to fly around the world on some incredible airlines such as Cathay Pacific or Japan Airlines. Alaska Airlines is not in any major airline alliance – which means their mileage program works a bit differently than other frequent flyer programs. Here are the basic rules:

Rules of the Award Ticket Stopover

The most powerful aspect of Alaska Airlines Mileage Plan is that you can have a stopover on one-way tickets. A stopover is defined as a city in which you spend more than 24 hours in. While stopovers are powerful (because you can visit 2+ places for the price of one), there are some rules which apply to Alaska Airlines award tickets:

Alaska’s website will allow you to book certain routes and stopovers that are technically not officially allowed per the Mileage Plan rules, but you can book it if the website shows you the flight options. For example, you technically can’t have a stopover when flying domestically.. but the website allows you to… (fly Los Angeles to Seattle to San Francisco and stopover in Seattle for however long you want).

You can book award tickets online for all Alaska Airlines partner airlines EXCEPT Cathay Pacific and LATAM. You must call in to book these two oneworld partner airlines (use the British Airways website to search for award space and then provide that to the Alaska agent on the phone).

To search for award space and with a stopover, simply visit Alaska’s website and be sure to click the “All search options” link below the flight search box on the home page. Then you will redirected to a more advanced flight search:

Be sure to select the “Multi-city” and “Use miles” options on the left side and then type in your desired route with stopover city (in this case it would be Los Angeles to San Francisco with a stopover in Seattle), your desired dates of travel, and the number of passengers.

You will then be presented with a calendar for that week of travel with available flight options. Note that you may need to adjust your dates based on award availability. 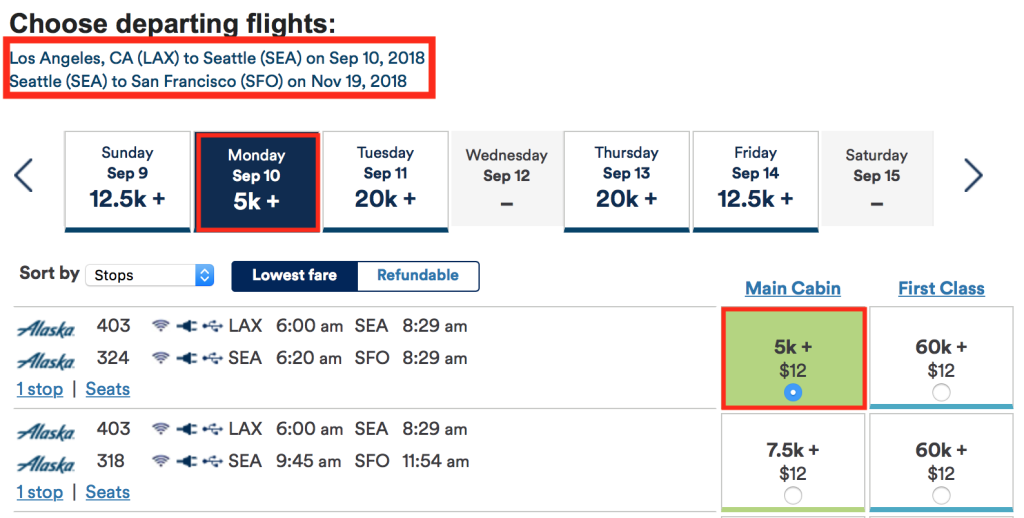 When the search is complete, we will be presented with several flight options. You can play with the calendar, dates, and prices until you find your desired flight combination and desired cost.

Alaska prices out flights starting at just 5k miles + $5.60.. so why do two flights cost only 5k miles and not 10k? Because Alaska knows you are flying Los Angeles to San Francisco via Seattle (stopover in Seattle) all on one ticket… and since you can have stopovers on one-way tickets, they only charge you a one-way price. You do have to pay the TSA Security fee twice as you have a stopover in Seattle for multiple days and will leave the airport and need to pass through security again.

If you were to book these flights separately, it would cost 10k miles because you would be booking two one-way flights instead of a single one-way flight with a stopover.

You can follow this procedure to book flights with partner airlines. For example, say you want to fly from Los Angeles to London with a stopover in New York on American Airlines. Not a problem! You would simply type in Los Angeles to New York and New York to London and your desired dates of travel. You will be presented with flight options and will be able to select your desired combination.

Alaska’s unique airline partners and powerful Mileage Plan frequent flyer program allows passengers to visit 2+ destinations for the price of one at very low award rates (especially if flying domestically). Keep in mind that it is always better to book two one-way awards instead of booking a round-trip award on Alaska since you would then be able to fly different airline partners on each ticket.

You can earn Alaska Airlines miles through their VISA Signature Credit Card, by transferring from Starwood Preferred Guest, or by buying miles during Alaska’s promotions. If you have any questions, please post them below and I would be happy to guide you.