In this Travel Miles 101 success story, Angela describes how she put together an amazing trip for her family of four to Costa Rica with miles & points.  Costa Rica is on my family’s shortlist of travel destinations, so all the tips she passed along about the actual trip will certainly help us and many others looking to travel there.

She also describes an upcoming trip to Europe with miles and how her family has saved over $12,000 in just the last year since she went through the free Travel Miles 101 course!

My family of 4 just returned from a trip to Costa Rica. It’s such a diverse and beautiful country. I feel like I could go back five more times and never do the same thing twice. There is something for everyone there: easy all-inclusives on the beach, romantic hotels, adventure travel, and a ton of family friendly activities. Before we went I’d heard the people of Costa Rica were super nice, and that is absolutely true. The service at the hotels where we stayed, and the restaurants we visited, was so gracious and kind. Though we went in the rainy season, it didn’t interrupt any of our plans. It rained once or twice a day for a short time, usually in the morning or evening, then the skies cleared up.

In January I purchased two tickets on Southwest Airlines, spending 65,240 miles, and got the tickets for our kids using two Southwest Companion Passes we earned. Over the next several months I kept my eye on the fares and called their helpline when I saw them go down. Southwest has a dedicated department for international travel, and sometimes getting the tickets sorted out was an exercise in patience.

Their international department is pretty new and they’re still working out some kinks and are still training their agents (who say things like: No TSA Precheck in STL or HOU for you because this is an international flight). But I love Southwest for how customer friendly they are, and for giving me back some miles when there was a fare drop, even if only one half of the trip had the lower fare. In the end I ended up clawing back about 15,000 miles. We paid $80.48 per person in unavoidable taxes and fees, the bulk of which is imposed by Costa Rica for “boarding” and “tourism”.

I earned the Companion Pass by going for the Southwest Premier and Southwest Plus cards and meeting the minimum spend in January when the bonuses were 50,000 each.  My husband earned the pass with work travel and regular spending. 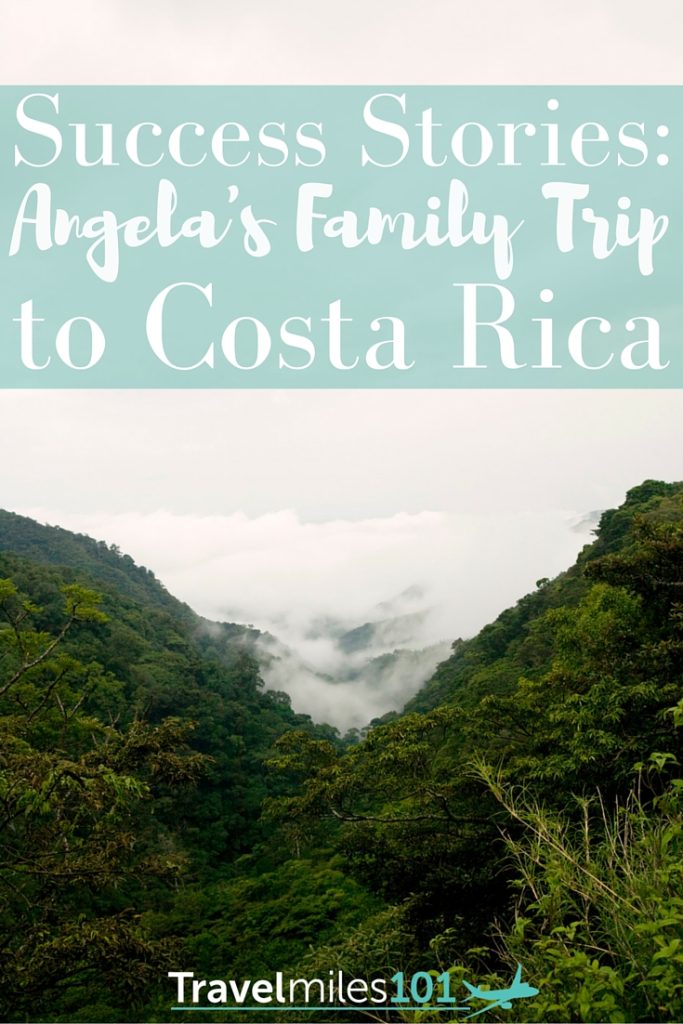 We flew into Liberia and rented a car, which was really easy to do. Here are a few tips: you must, by law, purchase their insurance! There is no way around it, no matter how great your credit card coverage may be. Make sure any quote has that insurance in the billing statement, or you may have an unpleasant surprise at the rental counter. Also, getting a GPS is great idea. They don’t have street names or numbers like we do in the US, but if you can get the coordinates of your destination you’ll be fine. Also, don’t drive at night. It can be tricky and also quite dangerous. Driving was no problem, but the roads are small, one lane each way, and we had to dodge bicyclists, and pedestrians more focused on their phones than the road in front of them. 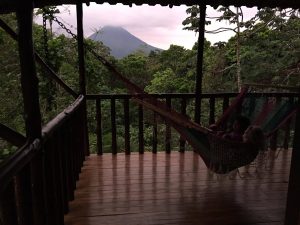 We drove three hours to our resort in Arenal/ La Fortuna arriving at night fall. The last half hour we drove on a super bumpy dirt road and were given a “Costa Rican Free Massage” along the way, thanks to all the potholes and rocks! We gave our carsick prone kids Dramamine before we started driving and that was the best thing we could have done for them. It knocked them out so they missed the stunning scenery, but they also missed the twisty winding roads.

We rented a cabin at Leaves and Lizards, and the cabin has a great wrap around porch. There was a big rainstorm the first night, which beat down on the non-insulated roof, and were very glad they gave complimentary ear plugs. Watching the storm from the hammock on the porch was awesome. We woke up to a view of the most volcano-y looking volcano I’ve ever seen. It looks like the drawings you did in kindergarten when you drew a volcano! 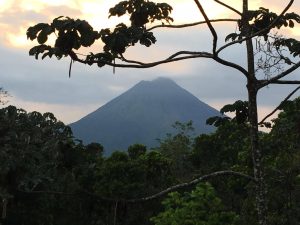 We saw a sloth in the tree right outside our room too! And they really are super slow moving, no exaggeration about that. Someone told me it’s because they eat hallucinogenic leaves and spend their lives “in an altered state of mind.”

We got a two-day pass called Club Rio Multi-Adventure Package at Springs Resort & Spa in Arenal/ La Fortuna (yes, that’s the one from The Bachelor in 2011.) The pass gave us access to all the natural spring areas, two adventure activities, animal preserve, and one enormous lunch. We did the river tubing, which was pretty mild but fun. We had lunch next. They give you one token per person for lunch and you can use it either day. Just hand it to the waiter. Lunch was so big we could have split two lunches between the four of us, and that way we’d have lunch both days! 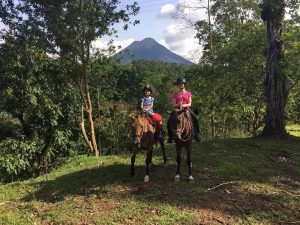 After eating, husband and 10 year old son were tired and went to the swim up bar at the main springs area, while 8 year old daughter and I went horseback riding. She was really excited when they gave her a horse of her own. They took very good care of her on the ride, and the horses are super tame and sweet. The guides were also great about taking photos and videos at the most beautiful places.

The animal preserve was outstanding. I thought it was more fun than a zoo.  They had spider monkeys, capuchin monkeys, howler monkeys, turtles, caymans, alligators, an ocelots, a mountain lion, sloths, and toucans. Our guide was a super funny young man who clearly loves his job.

The hot springs are fantastic. There are a few areas: one right by the resort with several springs and a swim up bar, the other is on the mountainside where you get to hike around and discover them. The last one is a short walk from the main resort area, where you can find a bar, and a really great waterslide. Adults and kids alike were zipping down that thing. 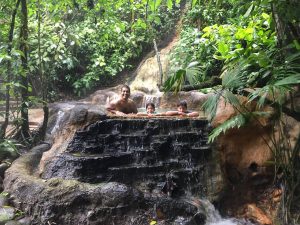 I paid for the car rental and most of the Springs two day pass with my Capital One® Venture® Rewards Credit Card. It’s so satisfying cancelling out charges with rewards! It saved us around $500.

We visited the Arenal Hanging Bridges Park, and took a guided tour. I enjoyed it so much more by going with a guide who was able to find small animals and show them to us in a really powerful scope. Eyelash vipers and poison dart frogs are just a few that we saw. We also took a guided evening safari float trip, which was very peaceful. The variety of plants and animals was unreal.

After three days near the volcano we drove to Tamarindo. It’s a funky, small surfer town on the Atlantic side of the country. Our hotel was Capitan Suizo, which we booked by using Citi Prestige’s travel agents. We were able to take advantage of their pay 3, stay 4 night perk by having them make the reservation. The agents could be more knowledgeable in general, but it was worth the hassle to get that free night. The hotel was right on the water, and we were able to walk up the beach during the day to get into town. We were warned to not walk up at night due to potential broken glass in the sand, and “over-served customers” wandering around. Since we had our kids with us, it was a no-brainer to drive the 5 minutes into town for dinner. 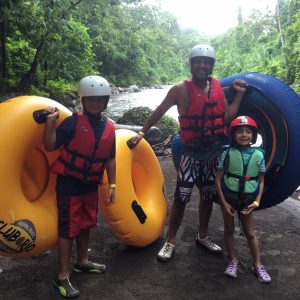 There are a lot of great restaurants there, but I was a bit surprised by the prices. I guess since it’s a town mainly frequented by tourists, I should have expected tourist prices. Again, the service and quality were great. Our resort was “Green Certified” which means they don’t spray for bugs. My husband and kids were fine, but the biting insects ate right through the 25% deet I sprayed all over me. I ended up with about 40 bites! The others had maybe 5 bites between the three of them.

I could have used my Barclaycard Arrival Plus card to offset some of the expenses, but I’m working on meeting the minimum spend for a Chase Marriott Premier card which will give me 100,000 points so I used that card on my trip. I need those points to make a hotel reservation in Paris for this fall!

Booked a Trip to Europe and Total Saved:

I also decided to save the Barclaycard Arrival miles to use in France and Spain. I splurged on the award tickets to Europe: we’re flying in business class to Barcelona! It’ll be the first time I’ve flown in anything but coach, and I’m really excited about it. I would have been more conservative with my award spending if I wasn’t earning more miles and flexible points on new credit cards.

So far this year, I estimate conservatively, that we have received about $1500 value for the Companion Pass, not including two more trips planned for 2016. Plus I still have the benefit for all of 2017! To be clear: I would not take as many trips without having the pass. But it’s easier to say “yes” to a trip when two people fly free, and a big bucket of miles is sitting in my account.

The value I’ve received so far by using Citi Prestige’s stay 4, pay 3 perk is in the neighborhood of $1,000. We have also used some of the points for a plane ticket worth about $450, so this year I’ve received about $1,450 worth of travel.  You have to book the hotel/ B&B/ resort through them, but it’s worth it. Even if they don’t have the property listed on their website they can still get you 4th night free. (Though we were told it does NOT work with VRBO properties).

My husband and I are going to Barcelona, Provence and Paris in the fall and we booked our reward flights last September by using existing points, and by transferring Chase Ultimate Rewards points to United. We splurged on business class tickets on the way there, which I conservatively estimate was worth about than $7,000. I would have gone for my usual coach class if I didn’t have more points and miles rolling in. We’ll also be able to use the airport lounges, courtesy of Citi Prestige. There is cash value by using the points, and intangible value like being able to upgrade to a better experience.

I’m planning on taking my family of 4 to Europe next summer. With a combination of sign up bonuses on American Airlines and United cards plus Ultimate Rewards and Citi ThankYou points plus some existing miles, we’ll be able to do this trip by only paying the taxes!

Valuing points is difficult. Based on TPG valuation this month I’ve received $10,202 worth of points (based on sign up bonuses and minimum spend only). That also is not taking into account the two business class seats to Europe which makes those points much more valuable, or the airport club passes. Nor does it include the complete value of the companion passes. I estimate around $1500 for the companion pass so far with 18 months to go, and $1,000 so far for the 4th night free perk. Total value, very conservatively estimated, is $12,702. Not bad for a hobby!