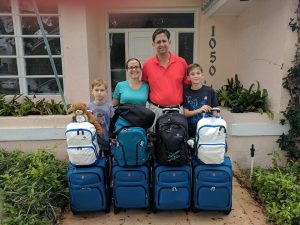 We are launching a special series here in Success Stories. One of our own, Travel Miles 101 Member Nicole DeBickes and her family, are starting a 30-month world travel adventure. We will introduce the family today, and check in with updates on their latest escapades and how they’re using their points and miles to make this trip-of-a-lifetime a reality.

Nicole DeBickes first contemplated a serious family travel adventure a decade ago. On maternity leave after the birth of her first son, Nicole read the book “A Year Off” and began to dream about the possibility of taking a year off to travel the world with her husband and son. Not everyone in the house embraced the idea.

“My husband thought I was crazy,” Nicole said with a laugh.

But she was not to be dissuaded so easily. Every couple of years she would raise the idea again, and over time, her husband Keith caught the excitement. Now with two boys – 9 and 11, the DeBickes are all on the same page.

“We have always loved traveling and would take the boys everywhere – they have already been to Europe several times, Costa Rica and Mexico. They love traveling almost as much as we do.”

So how does a family of four from south Florida transition from a very traditional “We love to travel!” mindset, to leaving their jobs and their families for 30 months and traveling the world?

Nicole and Keith are both software engineers. As their careers progressed and family grew, Nicole said they became frustrated with the lack of time they had to spend together. So, in true engineer form, she started a spreadsheet to begin cataloging all the places they wanted to go some day, and how many days or weeks she wanted to spend there.

And of course, how much each day would cost in that location.

“As it turns out, a day in London costs about three times more than a day in Thailand,” Nicole reported.

As they began to realize their dream trip could one day become a reality, the family started cutting back on eating out and other luxuries, as well as accelerating payoff of their mortgage. Their home will be rented for the 30 months they are out of the country, and that income is a big part of their financial plan to fund the adventure.

“All of our big trips up until then had been possible by finding crazy fare specials. We hadn’t really used miles or points. But after taking the course, I realized how much money it would save to get the big ticket, long-haul flights for free on our big trip.”

So 2016 brought a steady stream of credit card sign-up bonuses to the DeBickes – United, Chase Sapphire Preferred, Chase Sapphire Reserve, Barclays and Hilton all poured into the family’s coffers of points. Nicole said they didn’t have a problem hitting spending requirements, as they were able to cycle through their regular expenses like summer camp, insurance premiums and taxes in lump sums.

We will take a deep dive into how the DeBickes will be spending all of those accrued points in future stories.

But this week, their overseas adventure begins. On the DeBickes’ 15th anniversary, March 15, 2017 the family is flying from Hartford, Connecticut bound for Dublin, Ireland. Their four one-way tickets cost 80,000 Avios points on British Airways (and $137 in taxes).

The points were earned through a British Airways credit card bonus, as well as some old AmEx points they transferred to BA.

As their 30-month trip begins, Nicole says her sons are excited about the adventure. Their return to the States will coincide with their oldest son’s start of high school. “It was important to us for our kids to have a normal high school experience, so we’ll be back.”

While they are on the road (and in the skies), the boys will continue their studies through Florida Virtual School as registered homeschoolers. “It’s a good program that allows them to work at their own pace, really giving us great flexibility as we travel,” Nicole said.

This schooling arrangement is driving their housing plans as the family trots across the globe. “Every time I look for accommodations I have to confirm strong wi-fi,” Nicole reports. “Well, and washing machines. We’re each bringing a carry-on size suitcase and a backpack. So there will be a lot of laundry in our future!”

Over the last year as the family began preparing to leave and packing up their belongings, word spread of their plans. “People think we’re certifiably insane,” Nicole said, laughing. “We really get two reactions. Some people say it’s amazing and they wish they could do it, too. And then there’s people who look at us in abject horror because it sounds like their worst nightmare.”

For the DeBickes, it is truly a dream come true. One that has been a decade in the making.

That magic spreadsheet born 10 years ago comes alive as they wing their way across the Atlantic tonight!

Success Stories, Trip Reports
Success Story: Saving $25,000 on Anniversary Trip to Europe
Success Stories
How We Saved $4,247 By Getting Two Vacations for Nearly Free
Success Stories
TM101 Family’s Around-The-World Adventure Continues
Close
Manage Cookie Consent
To provide the best experiences, we use technologies like cookies to store and/or access device information. Consenting to these technologies will allow us to process data such as browsing behavior or unique IDs on this site. Not consenting or withdrawing consent, may adversely affect certain features and functions.
Manage options Manage services Manage vendors Read more about these purposes
View preferences
{title} {title} {title}